Built at Swindon in 1949, 9681 spent the majority of its BR service in Wales working at various locations including Tondu, Aberbeeg, Barry and Cardiff from where it was withdrawn in July 1965. It travelled under its own steam to Woodhams Bros. scrapyard in Barry where it languished for the next 10 years. 9681 was rescued from the breakers in October 1975 and transported to Norchard where in September 1984 it moved under its own steam. 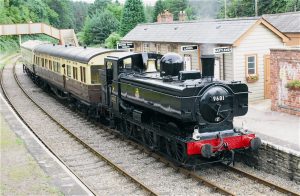 9681 was withdrawn from service in August 2001 and dismantled for major overhaul – restoration progressed well on the frames and motion whilst the boiler was overhauled at the workshops at the Old Flour Mill, Bream near Lydney. 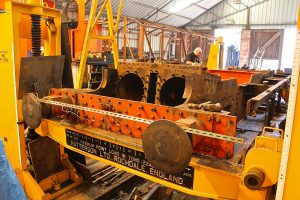 DFR days is to be found in a book available from Norchard Bookshop.

The engine was withdrawn from its last operational stint in October 2013. A comprehensive overhaul of 9681 has now started with the engine expected back in service in 2020. 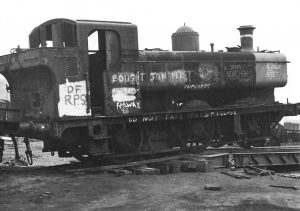 9681 is propelled onto the low-loader by a Class 08 loco which fortunately for us was shunting the yard, the transport had arrived sans winch. (photo John Hatton)